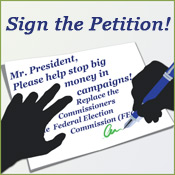 With campaign spending spinning out of control, the League has taken the unusual step of joining a petition drive to replace members of the Federal Election Commission. Sign the petition by Feb. 10.

Spurred on by the Supreme Court’s decision in Citizens United, big, special-interest money from corporations and wealthy individuals is already swamping our campaigns through so-called Super PACs.

ACT NOW to protect our democracy.

The Federal Election Commission (FEC) has fueled Super PACs by ruling that candidates can appear at Super PAC fundraising events, and that Super PAC spending is still “independent” of the candidate. Unbelievable! But TRUE.

We must replace the FEC commissioners, and your signature could push us over the top.

Thanks to the already overwhelming response from League members, we have pushed the number of signatures within a few thousand signatures of our goal! We could not have done this much work without you; we still need 3,000 signature by Friday, February 10th!