The following is a guest blog written by M. Susan Savage, the first female Mayor of Tulsa and former Oklahoma Secretary of State. To celebrate Women’s History Month, we asked her to share her insights on women in politics and the importance of voter engagement. Read below to learn more about her journey and what she sees for the future of Oklahoma. 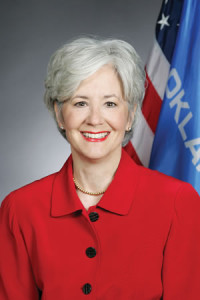 My first foray into elected office was the 1992 Special Election for Mayor of Tulsa where I received a plurality mandate among a field of 54 candidates. Gender was obviously not a barrier in that race.

Elected as Tulsa’s first woman Mayor, interest in whether or not I would focus on “women’s issues” emerged. A post-election question posed by a citizen defined “women’s issues” as education, domestic violence, sexual assault, healthcare and childcare. My response? Those are community and societal issues; workforce issues; economic issues; human rights and health issues. They are issues which demand the best thinking and decisive action from every citizen.

Questions about whether or not I could or should be a working mother with school-aged children and references to my physical appearance became opportunities to dispel conventional attitudes. I quickly learned to either ignore, brush aside with humor or use such uninformed perspectives to make a larger policy point. It became apparent my sphere of influence could reach beyond governance, especially to young women and girls, to expand their thinking about their potential and preparation for leadership.

The women on whose shoulders I stood as a public official at the municipal and state levels were remarkable role models whose wisdom and counsel were generously shared with me. I witnessed their capacity to shape public policy, to publicly lead and to balance the challenges of public and private life. They were the gold standard–Norma Eagleton, Penny Williams, Patty Eaton, Mary Athens, Maxine Horner and Wilma Mankiller—and so many other women who blazed a trail for civic and political engagement, who inspired and mentored. I took their lead and continue to share my knowledge with women and men whose love for public service and public policy sets them apart from those simply engaged in political pursuits.

In the year 2020, our country will commemorate the 100th anniversary of women’s suffrage. Each and every time I exercise my right to vote as a citizen of this city, state and country, I am reminded of the relentless advocacy of those who understood that until all citizens had an equal voice, our country was incomplete.

Voting remains an intensely personal experience for me. My grandmother was nearly 21 years old, married and pregnant with my father when she was finally granted the right as a US citizen to vote. It has been less than 100 years since women were granted full citizenship rights by a Constitutional amendment which was barely ratified. In my grandmother’s case, she lived to see her granddaughter elected as Tulsa’s first woman mayor (I always assumed she voted for me but never asked!). A photograph of her, well into her nineties, sporting a Savage for Mayor button is a cherished and poignant reminder of the short distance between generations and the power of one vote. On the occasion of my daughters’ 18th birthdays, respectively, registering to vote was part of their celebration and remains an unquestioned obligation for each of them.

Today voting patterns in Oklahoma reflect disengagement and a lack of interest. Voter participation has fallen to such lows that a minority of registered voters now shape laws and policies for the majority. Barriers to voting have been promoted and passed into law as safeguards against system fraud…a solution in search of a problem…and have impacted voter access to the polls. The trends are concerning enough to have prompted bills in the current session of the Oklahoma legislature with the goal of increasing voter access.

The rate of change in our communities, the rise of global competition, and the expanding applications for technology are creating unprecedented challenges for the world in which we live and demand an educated and voting populace. The debate about whether or not women can do the job in public or private life has long ago been resolved…women are doing the job across the spectrum, with confidence and a sense of purpose, leading and working to advance the values and standards which will shape our future. Their intelligence, strength, resourcefulness and tenacity remain an inspiration and elicit a sense of optimism for what can be achieved when women of all ages and from all backgrounds choose to engage.