Today is the birthday of feminist Elizabeth Cady Stanton. Born on November 12, 1815, in Johnstown, New York, Elizabeth Cady Stanton was an abolitionist and leading figure of the early woman’s movement. An eloquent writer, her Declaration of Sentiments was a revolutionary call for women’s rights across a variety of spectrums. Stanton was the president of the National Woman Suffrage Association for 20 years and worked closely with Susan B. Anthony (Source). 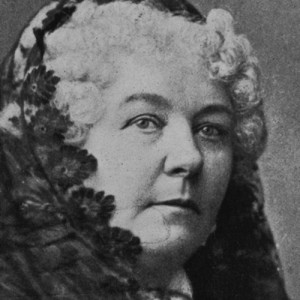 Stanton fought hard for the rights of other and was no stranger to adversity herself.  When her brother died, she was allowed to take his place in the Johnstown Academy; previously she hadn’t been admitted. She won honors there, but even so, no college would take her. She studied law in her father’s office, but wasn’t allowed to take the bar exam or practice law. In 1848, the first women’s rights convention in America was held near her home in Seneca Falls, New York. With Susan B. Anthony and Matilda Joslyn Gage, she compiled the first three volumes of The History of Woman Suffrage.

Stanton said: “The moment we begin to fear the opinions of others and hesitate to tell the truth that is in us, and from motives of policy are silent when we should speak, the divine floods of light and life no longer flow into our souls.”