Long-time member Sally Fraiser sent this to me yesterday, May 1. It’s from the National Women’s History Project in Santa Rosa, CA. Their contact information is at the bottom. I hope you enjoy this list as much as I did. Feel free to share. To paraphrase an advertisement (for cigarettes, no less): We’ve come a long way, but there is much more to be accomplished. 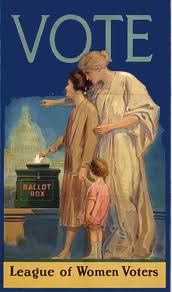